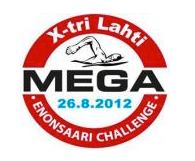 Something special happened in Lahti, Finland today: the first Mega Enonsaari Challenge. It's a new endurance event with a different concept. It's not a race, but a friendly 5K swim to raise awareness for the Let's Save Lake Vesijärvi campaign.

13 swimmers swam from Sibelius Hall waterfront to Enonsaari island in Lake Vesijärvi. The route was a little over 5 km and it took us a little under 2 hours. The pace was kept relaxed and easy as this was a fun swim.

The start was 10am and by noon everyone was already finished. Except four brave swimmers, who swam back, totalling over 10K! I wasn't one of them. Although the weather was sunny and nice 16-18C with a weak wind, I got a bit cold in the 17C water. Apparently I need to get faster or fatter!

A lake rescue motorboat and several canoes assisted the swimmers to guarantee their safety. Fortunately everyone felt fine and there were no problems.

The event was absolutely free for participants, but they had to carry a sponsor logo inside their wetsuits to the island. As the swimmers arrived, the logos were revealed to the small audience gathered at the finish. Then there was a free lunch for all!


The event was successful in attracting attention for the lake water campaign. Local press covered the event already.

Enonsaari is a really nice summer destination. Most visitors choose to arrive by boat though :)


Once again I hid my Ambit in my swim cap. The GPS data shows that we started very slow and easy. We took a lot of breaks in the beginning to make sure everyone felt fine. The second and fifth kilometers were pretty fast. Km's 3-4 were easy long swim pace.

The group didn't manage to stay together until the end. It was ok, as there were enough canoes for each subgroup.

The lake is really bigger than it looks and 5 km is a long way to swim I learned today. Although we could see the island all the way, it just didn't seem to get any closer no matter how hard I swam!

The trip back to Lahti was fun in the speedy Lake Rescue boat! 60 km/h feels pretty fast after swimming about 2.5 km/h.

The lake water wasn't very clear, but it seemed to be ok to swim in. There wasn't too much blue algae due to the cold summer we've had. It would have been nice to swim in warmer water, but then there would have been more algae.

Lahti is only 104 km from my hometown Helsinki, but apartments are much cheaper there. Still most people prefer to live in Helsinki, if they can afford it.

Sibelius Hall is a good example for modern Finnish architecture. The architects are said to have been inspired by the mystique of Finnish forests. The concert house is mainly made of wood.

What a nice day. This was my longest open water swim ever. I'm already looking forward to next year's event!

Are you ready for UTMB?


Countdown for Ultra Trail du Mont Blanc 2012 will begin soon. Are you ready? Certainly more than mere physical fitness will be required. The Belief Effect might play an important role.

All four UTMB events (UTMB, CCC, TDS and PTL) will provide quite a rollercaster ride ending in Chamonix. I'm humbly attempting CCC (Courmayeur-Champex-Chamonix) 100K this year. With 5,950 meters of vertical ascend (and about the same amount of descend), it's far from an easy course. The profile reveals we will climb two mountain passes over 2,500m height as a warm-up and finish with three smaller ones - still at over 2,000m height each.

CCC is limited to 1800 runners, who will start at 10am on August 31st in Courmayeur. We have 26 hours to finish, and there will be six cut-off points along the way. The organisers will provide live tracking to my Twitter. The whole UTMB week will also be webcast live.

With UTMB, it might be a good idea to get prepared for all sorts of surprises. The starting time, route and course length have been variables in the past races. No one knows what the weather will be like. The organizers will text you about any changes, so you better check your phone when possible. The more flexible and adaptable your attitude, the better your chances of avoiding the dreaded DNF are.

Perhaps this funny animation shows best how an event like UTMB might unfold from a participant's perspective. Bon courage!

An open water swim around Seurasaari island has been on my bucket list for a long time. I've run around the island probably a hundred times. Today I finally did the swim with a buddy from Helsinki Triathlon club.

The weather was perfect, unusually warm (max 23C/73F) and calm (East wind 1-3 m/s).  The water was warm enough (about 15C/60F) for a wetsuit swim, but not too warm to develop potentially toxic blue algae.

Unfortunately Gulf of Finland is not the clearest of seas. You might just see your own hand under the water, if you are lucky. However it was safe to swim in this location at this time according to the official water quality measurements.

Our navigation was quite successful, although we were forced to readjust our direction occasionally due to underwater rocks. Fortunately we didn't encounter any motor boats, only a couple of kayaks.

The island is really beautiful natural location. It incorporates a cafe, restaurant, beach and popular open-air museum. On a sunny summer day like this there are swarms of tourists walking around.

I wore Suunto Ambit GPS on top of my head, under my silicone swim cap. It showed we swam 3100 meters in 66 minutes. You are most welcome to view my data in Movescount.

New Balance 890v2 is the 2012 update to the popular 890 model. The British Miler is a special edition in the British flag colors. Maybe Andrew Baddeley would have done better in the London Olympics 1500m (3:36:03 in semi-finals) if he had actually raced in this shoe :) 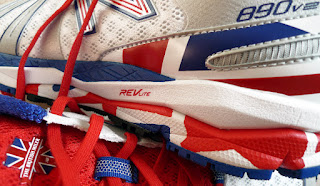 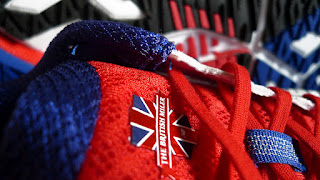 Weight is a very important factor when choosing a running shoe. NB 890v2 compares very well with my old favorite shoes. At mere 266 grams, it beats my Brooks ST Racers (271g). It's a bit heavier than my lightest shoes Adidas adizero (218g) and Brooks Green Silence (220g). All my trail running shoes are considerably heavier, even Hoka One One Stinson Evo (345g).


Rating:
Verdict: New Balance 890v2 is my new favorite marathon racer and lightweight trainer. This shoe makes me run (or at least feel) like Pekka Vasala in 1972!