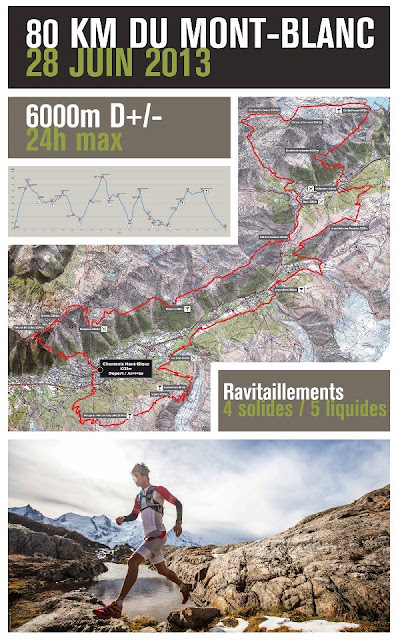 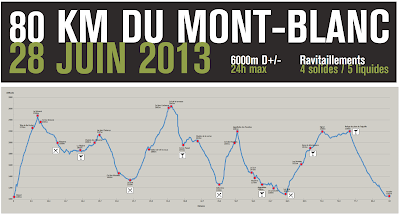 Here are some photos of the course I took last summer in Chamonix. Bon courage! 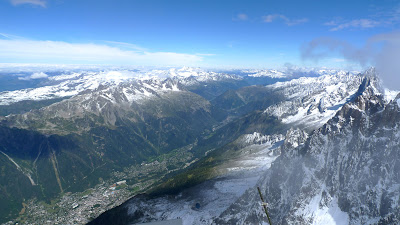 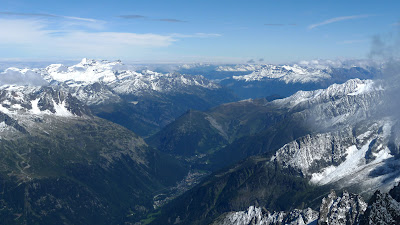 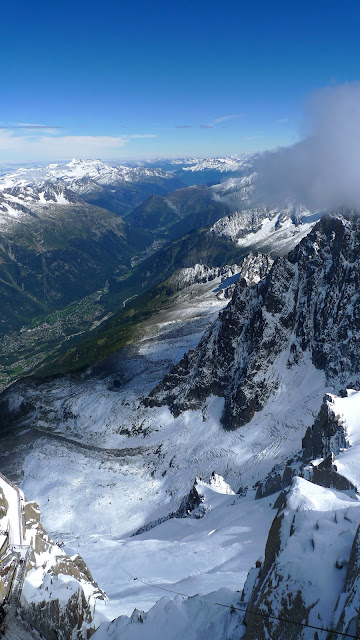 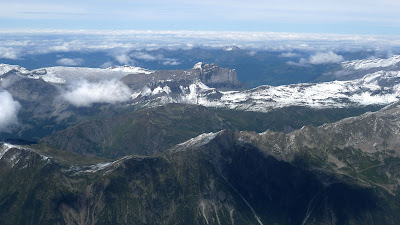 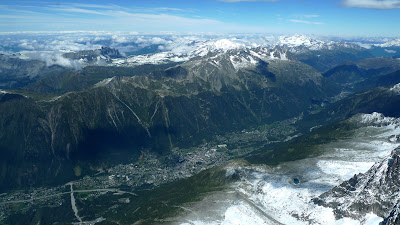 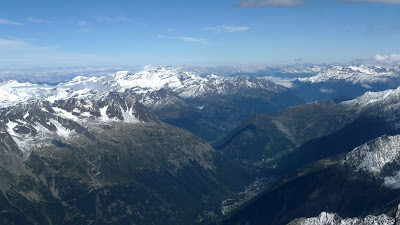 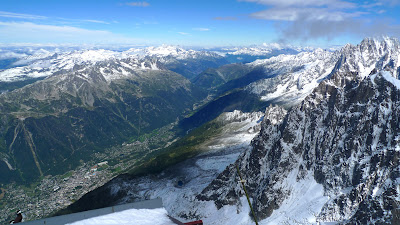 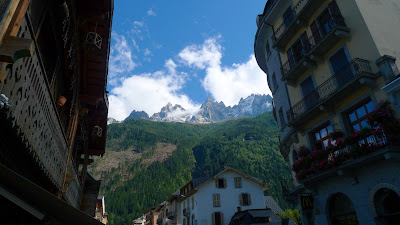 The Summit Seeker - Memoirs of a Trail Running Nomad is a new running book by Vanessa Runs. It's a concise biography of a young woman who retired by age 30 and loves to run. I downloaded it from iTunes for mere 3.99€ and read it at once. There are not too many books written by runners. I enjoyed Haruki Murakami's What I Talk About When I Talk About Running and was hoping for something similar, but different. I wasn't disappointed. There may be more experienced or successful runners than Vanessa, but possibly few of them could write as well as she. The book was smooth and pleasant to read, just like her blog. No need for ghost writers in this case. Vanessa used to have a job as an editor, before she quit working. Still it's good to have someone else edit your book. This book was edited by Susan Fish, and she did a pretty good job, there were only a couple of typos.

Vanessa's father was a Babtist minister, so perhaps not surprisingly there's a lot of religious and spiritual stuff in the book. There's nothing wrong with that, but I was expecting tons of practical dietary advice like in Eat & Run by Scott Jurek. The author mentions having attended a nutrition school and having opened a nutrition practice of her own, but we only learn that she used to be fearful that there wouldn't be enough food. She is grateful for any food as she knows the value of it and what it means to be without. Like a trail hobbit, she likes to eat a second breakfast. (Yes, there's a whole chapter of hobbit lessons). She and her boyfriend Shacky also seem to love drinking beer and wine at ultras, which is something you certainly wouldn't find in say, Finding Ultra by Rich Roll.

The highlight of the book for me was the Grand Canyon R2R2R. Vanessa's crazy bunch was further enhanced with Gordy Ainsleigh, the legendary pioneer of modern ultra trail races. He also wrote the Foreword, which is almost worth the price of the book in itself. Long story short, he makes the point that ordinary people have fascinating lives, if you only could ever get them to tell the truth. The Summit Seeker is the fascinating truth about Vanessa.

The most useless chapter was 'On Ultrarunner Narcissism'. First I thought this is a joke, but Vanessa genuinely seems to suspect we ultra bums are egocentric. Actually it is a great joke, like worrying if hobos are vain! She even slaps our ugly mugs with "You're not as awesome as you think you are."  Luckily she comes back to her senses on the chapter about excuses and makes a U-turn: "...instead of looking at you with admiration, people will look at you like you're insane." Coming from a triathlon background, I really wouldn't worry about us introverted nerds learning to blow our modest trumpet.

I wondered why the title is The Summit Seeker, as this book is not about mountaineering. Obviously Vanessa is not Kilian Jornet. Or who knows, maybe she will be! However there is the Chimera 100 race report, a real mountain ultra trail race which surely was a breakthrough performance for her. But ultimately this book is not about running either. It's about transformation. After all, the name Vanessa means 'butterfly'.

Perhaps Vanessa's bucket list now contains more mountain ultra trail races. Oops, I almost forgot she doesn't have a long-term plan or a bucket list. She pursues her whims as they come. I really do admire that attitude. It reminds me of something Nassim Nicholas Taleb wrote in Antifragile, but that's a different story.

The only problem is that the best ultra trail races have become so popular you cannot just show up and register a week before. Of course you are always free to organize your own events anywhere and anytime you like. And in a recent interview, she mentions wanting to run Copper Canyon Ultra Marathon, Fuego y Aqua, Hardrock 100 and Angeles Crest 100 "someday".

There were not too many pages. I felt the author could have shared a lot more. Maybe she chose to save some of the stories for her next book. I'm already looking forward to reading it. Like she says at the end, her adventure has only just begun.

Vanessa has stayed hungry and foolish like a beginner, she has not lost her faith, and she does what she loves - exactly like Steve Jobs told us. I wonder why so few of us have the courage to follow this simple advice today. There is no reason not to follow your heart.

3 comments:
Email ThisBlogThis!Share to TwitterShare to FacebookShare to Pinterest

It's March already with spring and sun, but we still have plenty of snow on our forest trails. This is my usual route, which I typically run several times a week. The temperatures are freezing cold, especially at night. Marching on!


2 comments:
Email ThisBlogThis!Share to TwitterShare to FacebookShare to Pinterest

Cycling from Helsinki to Costa Rica

I've now cycled virtually over 6,000 miles (about 10,000 km) on my Cervelo P3 triathlon bike and Tacx Bushido wireless trainer. It equals roughly the flight distance from my hometown Helsinki to Costa Rica, a country I'd sure like to travel to in real life.

Yes, indoor cycling on a trainer isn't comparable to real outdoor activities. And as mentioned in my initial review, Tacx software is one of the buggiest and least user-friendly on Earth. But am I unhappy with my decision to buy Bushido two years ago? No way; this flawed machine has proved to be a rather wise investment.

I've done all this cycling as an extra cross-training, when I certainly wouldn't have been exercising otherwise. It hasn't taken anything away from my life thanks to a simple habit: whenever I feel compelled to surf on the net, watch a movie or play a computer game at home, I consider the possibility of doing so while cycling. This often works surprisingly well, as it paradoxally offers the opportunity to waste and save time and to exercise and relax/recover at the same time.

I've usually not even tried to use all the fancy features of the software, since I have other more fun/interesting things to attend to. I simply spin away at an appropriate effort level without thinking twice. If I really wanted to train seriously, I'd go out for a run. I just keep on cycling until I want or need to stop pedaling. There's no stress or anything like that. These are mostly 'junk miles' for sure, but I'm kind of happy to have cycled all the way to Costa Rica in two years - without leaving home!

Guess what I was doing while writing this? A bike trainer can be helpful for blogging too :)

Hoka One One upset the minimalist running shoe scene in 2011. Co-founded by Nicolas Maermoud, the French guy who finished third in the 2007 UTMB, Hokas got me interested from day one as my goal was (and still is) to run UTMB.

The downside was they cost a fortune: 145-155€ + shipping from France. So I wanted to see if they would last 1000 miles and be a good investment compared to other shoes that cost 30% less, but last 300 miles. Long story short, the answer is yes.

My first Hokas were Bondi B in March 2011. They ended up working pretty well for me after getting used to them.

The main issue was that the size of this this model got mislabeled by a half size. Therefore some of those who mail-ordered this shoe, may have got a slightly small size. Maybe that's why I didn't initially love this model.

Eventually I finished Transgrancanaria 123 km in Bondi Bs, my longest ultra trail race so far. Now they've got 951 miles behind them. I wouldn't race in them anymore, but they still are good training shoes. I ran in deep snow (after an all-night blizzard) with them today, and they were alright in those challenging conditions.

I've now logged 1,002 miles with Stinson Evos, and counting. They are still very comfy and this is clearly the winner of my 1000 mile ultra test ride. However they are pretty well worn out, I've got to admit. The soles and the heels are a bit torn here and there and the speed laces were replaced a long time ago. By the way, Stinson Evos came with a thinner insole and an extra pair of laces in the box - now please tell me how many businesses would do something like that in this age of brainless cost-cutting? I thought so.

Hokas are obviously not like other running shoes, but their most important advantage may be the unvisible one: they may be the most antifragile shoes on the planet! Just like us ultra trail runners, somehow they seem to get better under stress and in challenging conditions.

Actually Mafate may well be the most durable model of them all. Too bad my Mafates, which I bought in December 2011 for a reduced price,  are also stiffer and heavier than the other models. Too much of a good thing can become a bad thing. Shoes made of steel would last forever, but only Ironman would like them.

At the moment I've logged 675 miles with my Mafates without any major sign of wear or tear, but I'm not using them that much anymore. I'm pretty sure though that they will reach 1000 miles before I throw them away. I had to cut them a little to ease the discomfort on top of my foot. I may well keep on modifying and testing them, just for fun if not for anything else.

Mafate was the first Hoka shoe, and they were still learning and experimenting how to get it right. Nothing wrong with trial & error. A lot of runners must have liked their Mafates, or the company wouldn't have come this far.

My hoka story will definitely continue in 2013. I'm looking forward to testing the new Hoka Rapa Nui Comp - a lighter trail running shoe with a 5mm heel drop. More about that later, when I can figure out where to get a pair to try. Keep your Hokas moving!