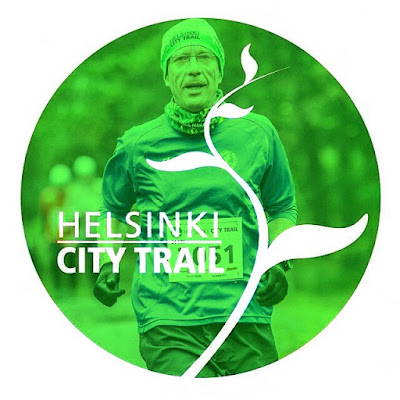 Helsinki City Trail in mid-October is the biggest trail running event in Helsinki and the second largest in Finland after Bodom Trail in May. Both are 21km races with a couple of shorter distance options.


21km course in starts at Paloheinä hill and climbs it again after a 10K loop in the Northern woods. Then it heads South to Laakso, where the finish area is. 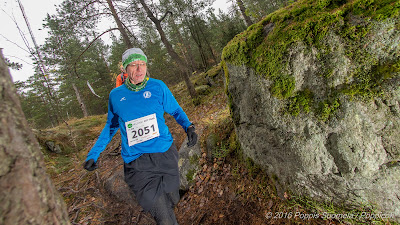 I'm not generally too fond of point-to-point courses, but in this case it wasn't a problem for me. I could easily reach both the start and finish by bus in just a few minutes away from my home.


HCT is entirely in the Central Park, which is a wild forest area within the city. There are small undulating hills and the total elevation gain is only 370m. The trails are mostly quite runnable, but there are some rocks and roots, and a few surprises. This time around the weather was cloudy 4-5°C drizzle, but it was only slightly damp - not muddy or slippery really.


My main goal for the race was to have fun and finish without re-twisting my left ankle. I enjoyed the run very much and finished in 2:14. This was my shortest race since a half-marathon in 2010. Trailrunning is slower, but I don't miss those fast road races at all. Times have changed.


Helsinki City Trail is organised by Classic Trails Finland. The same non-profit association is behind Nuuksio Classic Trail Marathon in September. They do a really good job. Also the volunteers are great. These guys are the best, but don't take my word for it - please participate yourself next year!
No comments:
Email ThisBlogThis!Share to TwitterShare to FacebookShare to Pinterest 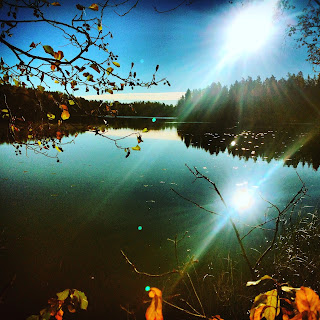 Back in Nuuksio again after the marathon on Friday for more. Like I haven't learned anything. This National Park is as dreadful as it's vast. Beware or be prepared to pay for your boldness. It's a fact, not fiction: notorious Nuuksio is a synonym for adrenaline-boosting adventure. 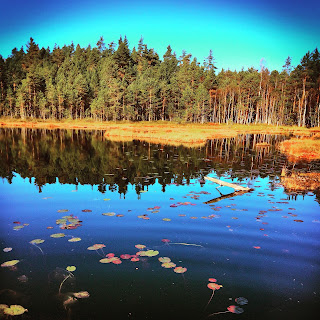 I planned for a long run, but the plod thickens: I sprained my left ankle AGAIN in the first 5K. Funny to be listening to The Running Man Charlie Engle on Proper Suffering. What is that makes us want to push ourselves past our comfort zones on broken bodies beyond reason? 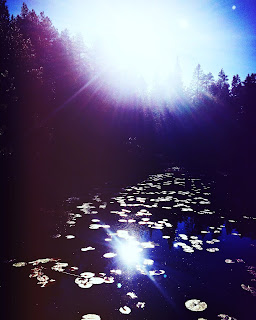 So I kept going on both new and old trails until I got tired. I drank water and picked apples from a tree. I continued until I collapsed on a bus stop. The bus to civilization would come in 5 minutes. What a dreadful 30K trail/off-trail run on a sunny but October day. I loved every minute of it. 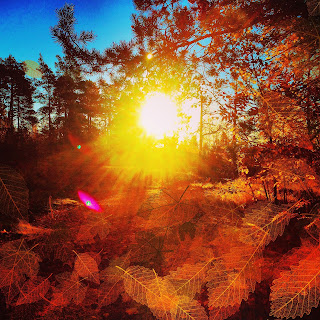 
I launched October Trailtober with a completely self-supported trail marathon. In fact, I started the day before October 1st. View it in Strava.


To add buzz to the adventure, I had no idea where my route would lead me. Except that it would most likely be in Nuuksio National Park.

I decided to start by taking bus 345 from Helsinki as far as it would go. Which is pretty far on the outer edges of Espoo, in a place called Vaakkoi.


I ran the first half mostly on the classic trail called Route 2000. The blue-white markings had worn off in many places. I took many detours, some for geocaching and photographing purposes, some simply because I wasn't sure where the route is supposed to go.

In Salmi outdoor recreation area the Cafe was open and I sat down for a cup of coffee and a delicious cinnamon bun. They let me fill my soft flasks in the kitchen sink. I was ready to continue.


I decided to turn south towards Solvalla, because I knew it would be possible to catch a bus back to the city from there. I also knew the trails there well enough to run without a map.


The sun was shining and and I had great time running on fabulous trails. Meddle by Pink Floyd blasted in my headphones and the lyrics of Fearless finally made some sense to me after 45 years. Climbing...

In the morning when I started it did rain briefly, so I carried rain gear in my vest just in case. Fortunately for the rest of the day it was clear skies all the way.


I ran to Solvalla via Haukkalampi, Mustalampi and Valklampi lakes. Those are popular places with hikers, but it wasn't too crowded.


I've often wondered if ultratrailrunners ever hit the wall. The answer is yes. For me it happened right after completing my marathon. I encountered this huge granite wall by the bus stop.


"If you run into a wall, don't turn around and give up - climb it, go through it, or work around it."
-Michael Jordan
No comments:
Email ThisBlogThis!Share to TwitterShare to FacebookShare to Pinterest
Newer Posts Older Posts Home
Subscribe to: Posts (Atom)