'Tahan is the hardest trek in Malaysia. Although Kinabalu is almost twice as high as Tahan, it's actually easier. I simply cannot let you go alone. Don't fool yourself. A youngster like you would have no chance against the world's oldest rainforest,' Mr. National Park Supervisor told me bluntly while checking my papers. 'This trek demands excellent physical fitness and mental determination. There are several hazardous river crossings, challenging climbing and traverses along dry ridges requiring rationing every last drop of water. For a well-equipped expedition with guides, cooks and porters, it's at least 7-9 day roundtrip to this highest mountain in Peninsular Malaysia. And if you get in trouble, don't expect my staff to rescue you.' 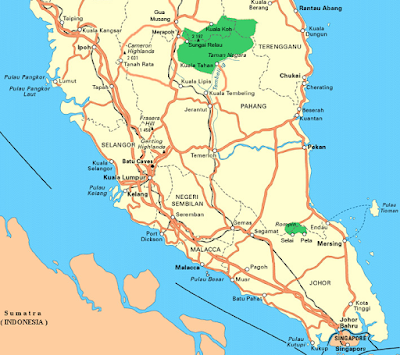 'Deal. Sounds fine to me. See you in less than seven days,' I replied and begun my solo jungle trek to Gunung Tahan, or Mt Endure in English. I had just learned from my Lonely Planet South East Asia guidebook that it was possible to do this exciting Tahan trek cheaply - all by yourself. I disappeared in the jungle before anyone had a chance to stop me. 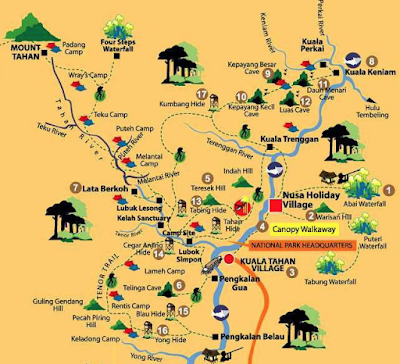 This happened about 30 years ago. I was in my early twenties and relatively fit. I had finished my first marathon run the previous year. I travelled by boat up the river to Taman Negara HQ in Kuala Tahan with a large backpack. I carried the big three of hiking: a tent, sleeping bag and foam mat. I had lots of food as well. Had I known how challenging it would be, I'd probably never have attempted this alone. As none of my friends were neither interested nor capable, I decided to do it. I thought it would be fun. I was confident that I got this. 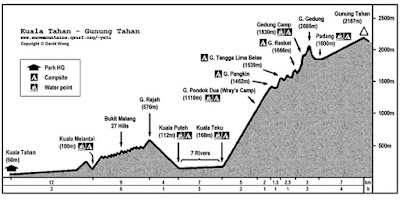 Taman Negara's fauna has it all in terms of dangerous creatures, including elephants, tigers, rhinos, snakes and spiders. After hiking just a few hours I found myself more concerned with dangerous flora. Specifically the thorny vine that had arrested my fall down a muddy slope. I yelled in pain as the tiny needles sunk deeper around my neck and body. I struggled a few minutes to grab a knife and cut the vine. Finally I was free to continue. After that I watched my every step more carefully.

Later on I encountered a Singaporean hiker hiking back home. He was shocked and cried a lot while telling his story. He had pitched his tent by the river. Several elephants had stomped over the tent while he was sleeping. Miraculously he had stayed alive and wasn't even seriously injured. The elephants had no intention to harm him. He just happened to camp on their path.

In the late afternoon I arrived at the first campsite by River Melantai. I had advanced maybe about 15 km. In those days we didn't have any GPS to measure the distance. I dove in the water with a big splash to clean myself and wash my muddy clothes. I pitched my tent and enjoyed a cold dinner. I didn't carry a cooker and jungle wood seemed too wet to burn. 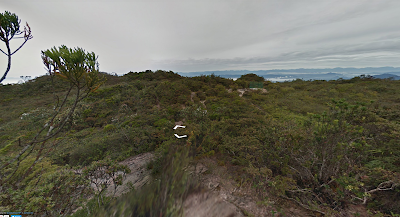 I noticed a few black leeches all over my body. It's impossible to avoid those tiny suckers in the jungle. They can easily drop from vegetation to crawl under your clothes. I carefully burned the ugly buggers off with a lighter. You have to let them inflate themselves with your blood first. Don't tear them off prematurely, or you risk getting a bad infection. 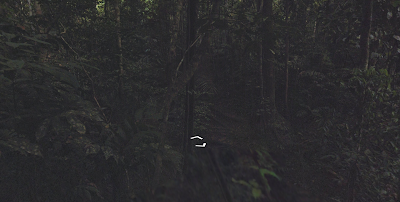 I expected a thunderstorm every evening. They don't call this rainforest for nothing. It started before I fell asleep. Laying on a sleeping bag and soft mattress, I felt safe in my waterproof tent. After a while the top outside fabric gave in and leaked badly. By the time the rain stopped, my tent had turned into a kiddie pool. Loud animal noises kept me awake all night as I laid down soaking wet. I imagined hearing scary beasts nearby, but luckily they left me alone. My strategy was to never unzip my tent before sunrise, no matter what. 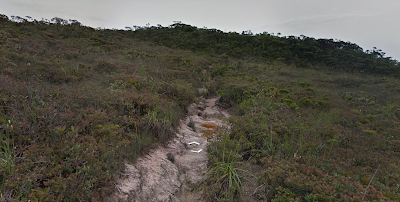 In the morning my body ached. I had to make my backpack lighter. I decided to hide most of the heavy canned food high on a tree for my return trip. Then I had a big breakfast. When I picked up my skyblue backpack it was a lot lighter, but covered with hundreds of skyblue butterflies. They must have thought it was their mothership or something. They followed me across the river for a while, which was fun but weird. 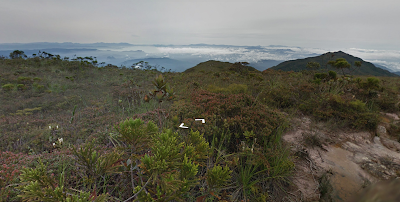 The second day climbed over 27 hills. My dirty contact lenses were not usable anymore. No worries, my pace was so slow that I had plenty of time to spot the route markings with my myopic eyes. The highest peak was 576m, followed by a steep trail downhill and seven river crossings. I used a stick I found to stay upright in knee-deep streams. I reached the second campsite after the last river. The flowing waters had kept me well hydrated, cleaned and cooled. I ate something and fell asleep quickly after burning away a dozen leeches. I estimated to have covered another 20 km and was on schedule. I felt happy after about my performance, but the worst was ahead. 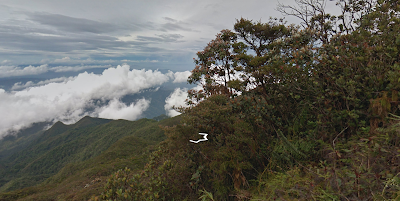 Serious mountain climbing started on the third morning. It was a shorter section than previous days, but all of it was steep uphill to the camp at over 1800m altitude. There was only one small stream about half way up to fill my water bottle. I felt better as it got gradually cooler and less humid. On the steepest rocks bouldering skills were required. I didn't have them, but somehow struggled my way up with bare hands. (Nowadays they have installed stairs and ladders there.) At night I was shivering as it was windy and only about +5°C. I hadn't thought of bringing warm clothing in the jungle. I had to anchor my tent real well to prevent it from flying away in the night. It was awesome to lie on that narrow ridge and watch the milky way glowing bright. 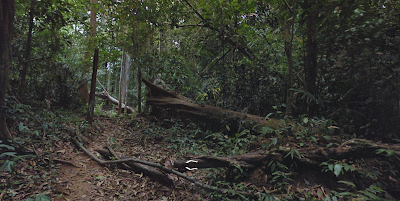 In the morning all my gear was dry and my spirits were high. The most difficult part of the climb was ahead. It was a vertical cliff about 250m up and down. There were some old ropes and I was barely able to do it. During the last descent my water bottle fell down accidently. I watched it drop into the jungle a hundred meters below me. I had to make it to the summit and back down to the last watering hole in one day. The summit ridge seemed long, but not too technical. I drank black swamp water from moss growing on the slopes. The 360° view from the 2,187m peak was magnificent. I wrote my name in the visitor book and headed back immediately. I barely made it back to the watering hole before dark. So far so good. 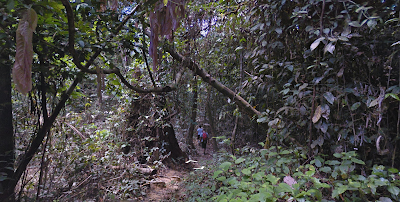 Without my water bottle I got dehydrated, confused and lost on the fifth day. After one of the river crossings I took the wrong turn left. It took me a long time to find my way back to the right track. I kept moving on along a river until I stumbled upon the familiar route markings again. It was a relief as I didn't have any food left. With the light pack, I was able to run pretty fast now. I was able to find the stash of goodies I had left. I was completely exhausted. I was so hungry that I ate it all. I thought this would have to be my last night in the tent. I couldn't take any more of this. 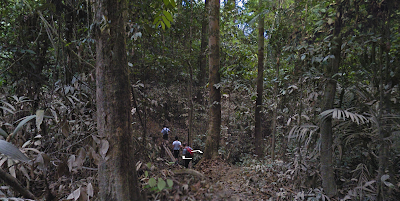 I'll never forget the astonished faces in the Park HQ as I rushed in. They stared at this crazy forest creature, who was covered in dirt and bloody rags. The Supervisor said 'You came back already... Where did you give up and turn back?'

'No no. I made it to the top of Tahan and back here in less than seven days. I did it!', I announced triumphantly at the finish of my 120 km solo jungle trek. Nothing else seemed too difficult after that.


Note: I didn't carry a camera and mobile phones didn't even exist. It was awesome to be able to relive my adventure with Google Maps Street View. All photos are screenshots from there.
No comments:
Email ThisBlogThis!Share to TwitterShare to FacebookShare to Pinterest

The Road to Sparta - book review 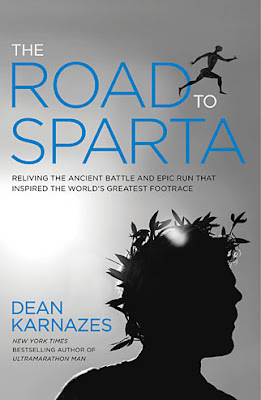 My initial reaction to The Road to Sparta is mixed. "There are always ups and downs during an ultramarathon," Dean Karnazes states. The same goes for this book.

On the positive side I was happy to finally be able to read Dean's Spartathlon 2014 race report. The ten chapters (19-29) about the actual Spartathlon experience are the best part. It's all vintage Karnazes including battles with blisters, nausea, fans, journalists, traffic, air pollution, hallucinations, sleep running and out of body experiences.

It was interesting to learn how even a seasoned pro ultrarunner can find it challenging to finish those 246km from Athens to Sparta within the 36-hour cutoff time. Amazingly there is a Vertical K skyrun (a mountain trailrun ascending 1000m by night) in the middle of this road ultramarathon.

The trouble with the remaining twenty chapters is that they must pale by comparison. I found all the  historic stuff borderline boring. I couldn't help feeling slightly sleepy while tracing the genealogy of Dean's calves and stuff like that. But I appreciate it was a 'voyage of self-discovery' for him.

Also way too many pages were decorated by unnecessary adjectives, cliches, Greek words and quotations. Don't be afraid to skip a little here and there - you won't miss anything essential.

References to marathon (both the victory and the modern running race named after it) could have easily been left out. First, the distance from Marathon to Athens is shorter than 42.2km. Second, Marathon was never featured in ancient Greek Olympics. Third, there is no proof that Pheidippides ever ran from Marathon to Athens. It may have been another messenger. In any case Persians invaded Greece a decade later, so the victorious Greek nike-moment was relatively short-lived.

I found it a bit weird that to relive the Pheidippides experience, Mr. Karnazes chose to eat only authentic ancient Greek foods like figs during Spartathlon. I doubt it's so easy to make it feel the same. The roads didn't exist at the time, so it had to have been trailrunning all the way. Also the runners were barefoot or had simple gear like sandals at best, as they weren't sponsored by The North Face.

Another issue is that to really recreate the epic journey of Pheidippides in 490 BC, one would expect Mr. Karnazes to run the same way back just the way the original Ultramarathon Man did. After all, ultrarunners like Marvelous Mimi have successfully completed Double Spartathlon.

Greeks invented democracy. Unfortunately our modern democracies are in ruins much like ancient architecture. We may have saved the banks, but possibly somehow lost the concept of 'rule by people' in the process.

Dean observes: "Suddenly witness to the brutal realities pervasive in this world, I found it impossible not to recognize that in 2,500 years of conflict and warfare between men and nations, not much had changed... Like Greece itself, the Spartathlon had been a dichotomous experience."

In summary, if Dean's first book Ultramarathon Man inspired you to run longer distances a decade ago, you'll probably enjoy reading this one as well. Surely in tough times we can be a bit like Dean in Spartathlon: "I won't give up without a fight."

The Road to Sparta: Trailer from Barney Spender on Vimeo.