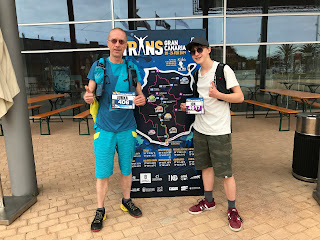 Transgrancanaria 2019 event was the best ever for three reasons:

1. The weather was sunny, clear and nice 23C all week.

3. We are both now happy Transgrancanaria 2019 finishers! 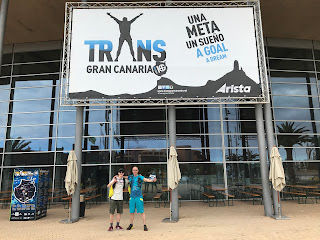 We picked up our race packets on Wednesday at the Expo Meloneras. Then we just ate well and chilled out at the pool in  H10 Playa Meloneras Palace. This official race hotel was once again filled with elite trailrunners. It was nice to meet Kaytlyn Gerbin there, my favorite in the women's race. I also followed Trans 360, the crazy unmarked adventure run around the island which had started on Wednesday morning. 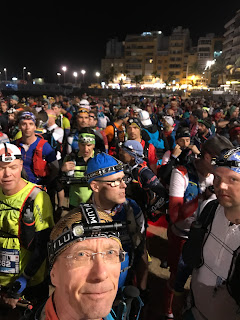 On Friday evening buses dropped us 128km runners in Las Palmas. We sat down in a cafe and chatted for 90 minutes with other Finnish competitors Vesa, Antti, Jouni, Kati and Jaana. As usual we were sent off from Las Canteras beach at 23:00 with live music, fireworks and huge crowds. 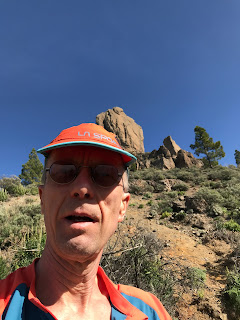 I ran the familiar trails through Arucas (17km, 2:18 elapsed), Teror (27km, 4:20 elapsed) and Fontanales (39km, 6;57 elapsed) in the long queue of headlamps throught the pleasant moonlit night with lots of spectators cheering and faraway dogs barking. Everything went well and climbing up hills felt easy with poles. However I avoided hurry as there is about 6,900m of elevation gain in this technical course. 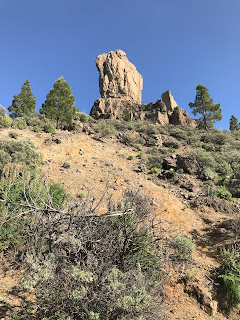 In the morning the rising sun found me Los Perez (51km, 9:36 elapsed) aid station by by a dam. This is a beautiful area with blooming almond trees and pine forests. It always elevates my spirit to run here, although my legs often start to get tired at this point.

The reception in Artenara (63km, 12:53 elapsed) was cheerful with my usual delicious pasta, crepes and coke breakfast available. It was just before noon and I saw that my son had already finished his 17km race in  2:20. I sent a couple  of messages to make sure he was ok and safely back in the hotel before continuing. My Brit friend Jon sent me a great finisher photo of  my son Jon. 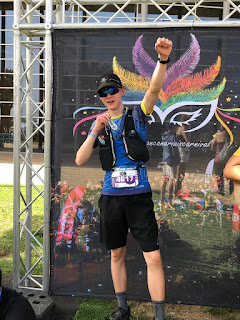 The scenic route to Tejeda (75km, 15:05 elapsed) was spectacular, but it was getting a bit too sunny and warm for someone coming straight from the dark arctic winter of Finland. For lunch I had my usual Canaria potatos with grilled zucchini and coke. The climb up to Roque Nublo (altitude 1718m, 17:30 elapsed) felt long and hot once again, but finally I arrived in Garanon (86km) after 5pm.. I got my drop bag, changed my socks, shorts and shirt, ate a little and rushed on as I was only a couple of hours away from the cut-off time. 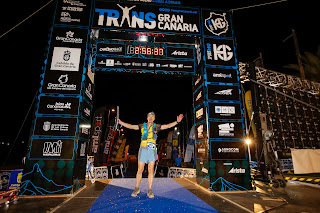 The new route to Hierbahuerto (101km, 21:56 elapsed) was mostly downhill, but it wasn't as fast as I'd hoped. Dry dust irritated my throat. I seemed to have developed quite a craving for salty potato chips and coke. It was dark again.

The steep newly added technical sections further down to Ayagaures (111km, 24:31 elapsed) went even slower. This place is well-known for good vibes and generous paella dinners. Someone there looked even more tired than me: Luca Papi, who kindly joined our 128km race as a cool down after winning his 265km Trans 360 on Friday. 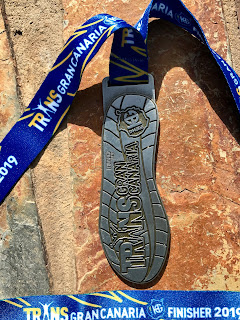 The last part of the course was the infamous dry river bed. It is what it is, the same as last year.

The important thing to note is that I didn't fall down and require any bandaids at all during this race - that's quite an achievement, considering my three earlier races (2012, 2015, 2018) on this magnificent island. I had a couple close calls with cactus plants, but was lucky enough to stay unharmed.

I finished just before 3am on Sunday. Official time 27:58:29. My Suunto 9 watch said it was actually 137km. It certainly felt that long!

Thanks to my fellow runners, organizers, volunteers and spectators, and La Sportiva Team Finland. See you in Transgrancanaria 2020. Animo! 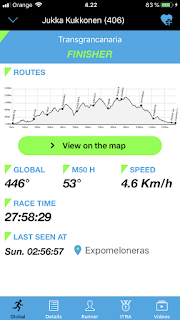