My 7 Epic Fails at Marathon of Dangers

The following seven epic fails at Marathon of Dangers 2021 Ultra 130 lead to my DNF after missing the first 65km night loop cutoff time by 28 minutes:

1. I failed to check if the course navigation works on my Garmin. It didn't. Might have been a corrupted GPX file or something. The course was marked, but GPS navigation would have certainly helped in the dark.

2. Overdoing my clothing. I wore a La Sportiva beanie and two long-sleeve shirts and a rain jacket at the start, because it was fairly chilly. I also had long tights. After the 6pm start it soon felt way too warm, and I had to stop and put the beanie, jacket and a shirt in my running vest. I also ditched the gloves after a while. It was an exceptionally warm October night at Koli National Park.

3. Pussyfooting at the Rykiniemi river crossing. A volunteer mentioned that it was possible to get over to with dry feet using the stepping stones. I wasted time looking for suitable rocks and got my feet wet anyway. Most runners used the cable system to cross the river. It would have been faster.

4. Insufficient eating, particularly lacking solid food. I had two soft bottles with Tailwind, ShotBloks and gels. Halfway through I searched for a Clif bar from my vest, but it wasn't there. I meant to carry two of them and some homemade marmalade, but had misplaced all of them in my drop bag.

5. Twisting my ankle at 35km. The trail was really technical. Many runners rolled their ankles several times. So did I, but this one was bad enough to slow me down and take the wind out of my sails. In other words, my wheels dropped off. Luckily I had poles or my race would have stopped right there.

6. Overestimating my pace during the last 26 km. At Kiviniemi 39 km aid station I had 5.5 hours to finish the first lap before 7:30am. I thought that would be more than enough. Well, I was wrong. The difficult section called Ryläys slowed me down.

7. Failing to read the rules. Normally in races cutoff means the time you have to leave the timing point. In this race it means however the time you have to arrive there. That's a a big difference because I planned to eat a meal, change some clothes and repack my vest at the half-way aid station. Had I been aware of this, I may have had some hope of finishing Lap One in 13.5 hours.

I completed the first lap 7:58am, in 13:58 hours. My Garmin measured 66.4 km with 2,649m elevation gain. It was fun and the weather was fine. I'm not happy with my DNF, but it's not all bad. Thanks for the volunteers, organizers and competitors. What a nice bunch of trail peeps! 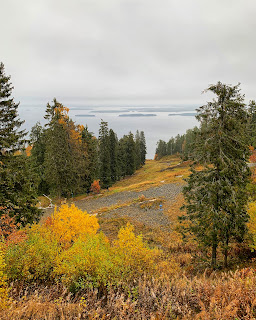 Point number 7 was a positive one, or not? Your problem was, that you didn't know this roule and you didn't try to reach it in the given time?